In this ENCORE Interview, we present the unabridged version of the discussion with cellist Gregory Beaver and TCC hosts Sarah and Willie, first heard in Opus 3 Episode 1, “The Plan.” The episode is about organization and planning in chamber music. In the history lesson, Justin explores the formation of several well known chamber ensembles. In the technique segment, Brandon presents an organization system called Scrum, which Greg also discussed further in the interview. As the cellist of the former Chiara Quartet, Greg was both Willie’s cello professor in graduate school and a mentor for the Skyros Quartet. 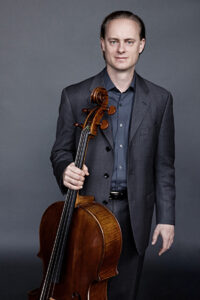 Cellist of the Chiara String Quartet for 18 years, Gregory Beaver performed over 500 concerts in concert halls on 3 continents, garnered a Grammy nomination, premiered 40 works, and recorded 7 major albums. In 2016, the quartet presented all 6 of Béla Bartók’s string quartets memorized in a 2 day period at the Ravinia Festival and regularly performed concerts with the quartet by heart. Gregory has composed several works for solo cello, duo, piano, choir, and other ensembles. He also holds the position of Senior Software Engineer at Braze, Inc. where he helps to deliver brilliant messaging experiences at scale. He lives with his wife, violinist Hyeyung Yoon, 2 daughters and cat in Jersey City, NJ. He plays on a fine Roman cello made in 1725 by David Tecchler.

Greg sent us the information for the virtual performance, mentioned in this full interview. Greg and Hyeyung Sol Yoon (also a member of the former Chiara Quartet, a Skyros Quartet mentor, and TCC guest from Opus 1, Episode 4!) performed for the Raritan River Music Festival on May 8, 2021 at 4:00 pm Eastern. You can find information about the live performance in-person in New Jersey or streamed online from anywhere here.

In the interview, Greg shares several books he’s recently read. Here is more information about each book that’s mentioned in the interview.

Beethoven for a Later Age: The Journey of a String Quartet by Edward Dusineberre

Lead from the Outside: How to Build Your Future and Make Real Change by Stacey Abrams

And finally, this is the book written by Greg’s uncle that helped inspire the Chiara’s journey into scrum: The Agile Team Handbook, by Jan Beaver.

Published in Interviews and Opus 3