In this ENCORE interview, we present the unabridged version of our round table discussion between the Lafayette String Quartet and Skyros Quartet. This wonderful conversation was spread over Opus 3 episodes two through four. In these episodes and in our conversation with the Lafayette Quartet we cover topics such as respecting your colleagues, how to effectively rehearse transitions, how a quartet creates its sound and much more! 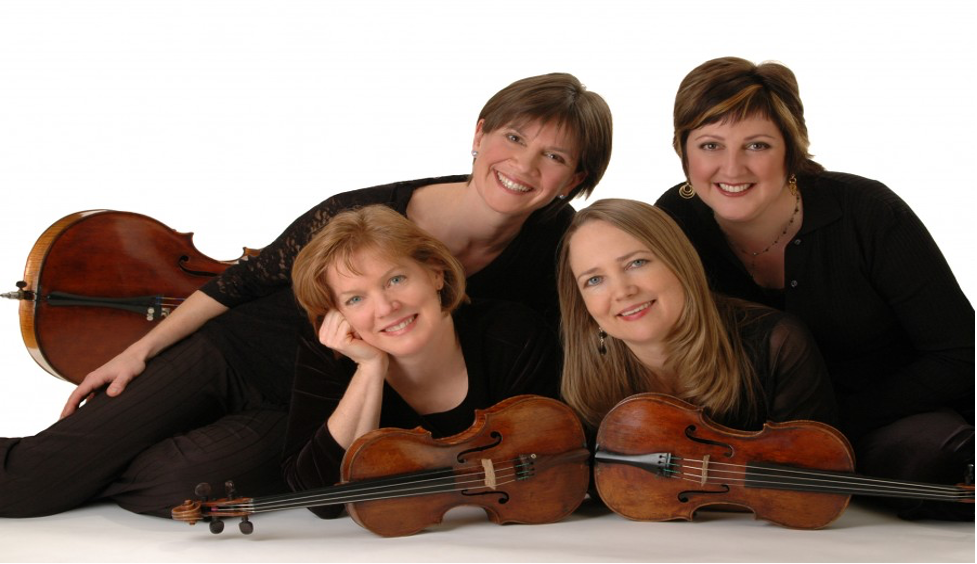 In July 1986, four young musicians, based in Detroit and just beginning their professional careers, performed together for the first time as the Lafayette String Quartet. Today the LSQ continues to flourish with its original personnel: violinists Ann Elliott-Goldschmid and Sharon Stanis, violist Joanna Hood, and cellist Pamela Highbaugh Aloni.

For five years, the LSQ remained in Detroit, where its members taught at the Center for Creative Studies/Institute of Music and Dance and at nearby Oakland University. Meanwhile, the LSQ itself received coaching from two of the world’s most esteemed quartets—the Amadeus and the Alban Berg—and from the violinist Rostislav Dubinsky, of the legendary Borodin Quartet, who served as the women’s “musical mentor” until his death in 1997.

The LSQ’s extraordinary musicianship was recognized early on. Already in 1988, it was ranked among the magazine Musical America’s “Young Artists to Watch,” and in its first years it won the Grand prize at the Fischoff National Chamber Music Competition and prizes at the Portsmouth (now City of London) International String Quartet Competition, and the Chicago Discovery Competition. As winners of the 1988 Cleveland String Quartet Competition, the LSQ had the opportunity to study for two years with the Cleveland Quartet at the Eastman School of Music, in Rochester, New York.
In 1991, the four women became artists-in-residence at the University of Victoria’s School of Music, in British Columbia—positions they still hold today. They received honorary doctorates from University Canada West and were honored with the inaugural Craigdarroch Award for Excellence in Artistic Expression in 2010 from the University of Victoria.

Besides teaching and performing (alone and with many colleagues) at the university, the LSQ makes a significant impact on the city of Victoria, through concerts—for instance, serving as section leaders of the Galiano Ensemble—and outreach activities, including advocating for music in public schools and administering the annual Lafayette Health Awareness Forum, founded in 2006.

The LSQ has performed across Canada, the United States, Mexico and Europe, with concerts often allied with masterclasses and workshops; they had a close and lasting relationship with the University of Saskatchewan, in Saskatoon while playing on the set of Amatis owned by the institution. They have collaborated with distinguished colleagues including bassist Gary Karr, clarinetist James Campbell, flutist Eugenia Zukerman, violinists Andrew Dawes and Gary Levinson, violists James Dunham, Atar Arad, and Yariv Aloni, Cellists Paul Katz, and the late Tanya Prochazka. Pianists including Luba Edlina Dubinsky, Jane Coop, Robert Silverman, Ronald Turini, Stéphane Lemelin, Alexander Tselyakov, Baya Kakouberi and Flavio Varani. They often collaborate with other string quartets including the Saguenay (Alcan), the New Zealand, the Penderecki, the Molinari, the Emily Carr, and the Quarteto Latinoamericano.

The LSQ carries a large, wide-ranging repertoire, from the classical period to the present, and has commissioned music from (and in some cases collaborated closely with) composers including Murray Adaskin, John Burke, Justin Haynes, David Jaffe, R. Murray Schafer, Eugene Weigel, and Kelly Marie Murphy. They have performed the complete Beethoven Cycle, during the 2000-2001 season, the quartets of the Second Viennese school with the Molinari Quartet in 2013, and in celebration of their thirty years together, the quartet performed the complete cycle of string quartets by Dmitri Shostakovich in the 2016-17 season.

Since 1990, the LSQ has released CDs on the Dorian, Centrediscs, and other labels (including its own). Its discography includes major quartets by Borodin, Debussy, Grieg, Shostakovich, and Tchaikovsky; Dvořák’s piano quintets (with Antonin Kubalek); and four CDs of music by Adaskin, for his AdLar label. Its 2002 CBC Records disc Death and the Maiden, featuring music by Schubert, Fanny Mendelssohn-Hensel, and Rebecca Clarke, won the Western Canadian Music Award for Outstanding Classical Recording. It recorded Michael Longton’s Almost Nothing Like Purple Haze for the 2011 CD Jimi Hendrix Uncovered, and has recently released a CD together with Alexander Tselyakov of the quintets of Dmitri Shostakovich and the newly commissioned quintet Motion and Distance, by Canadian composer Kelly- Marie Murphy.

The LSQ is the subject of David Rounds’ book The Four and the One: In Praise of String Quartets, and a documentary film to be released in the new year entitled Creating Harmony.

Published in Interviews and Opus 3